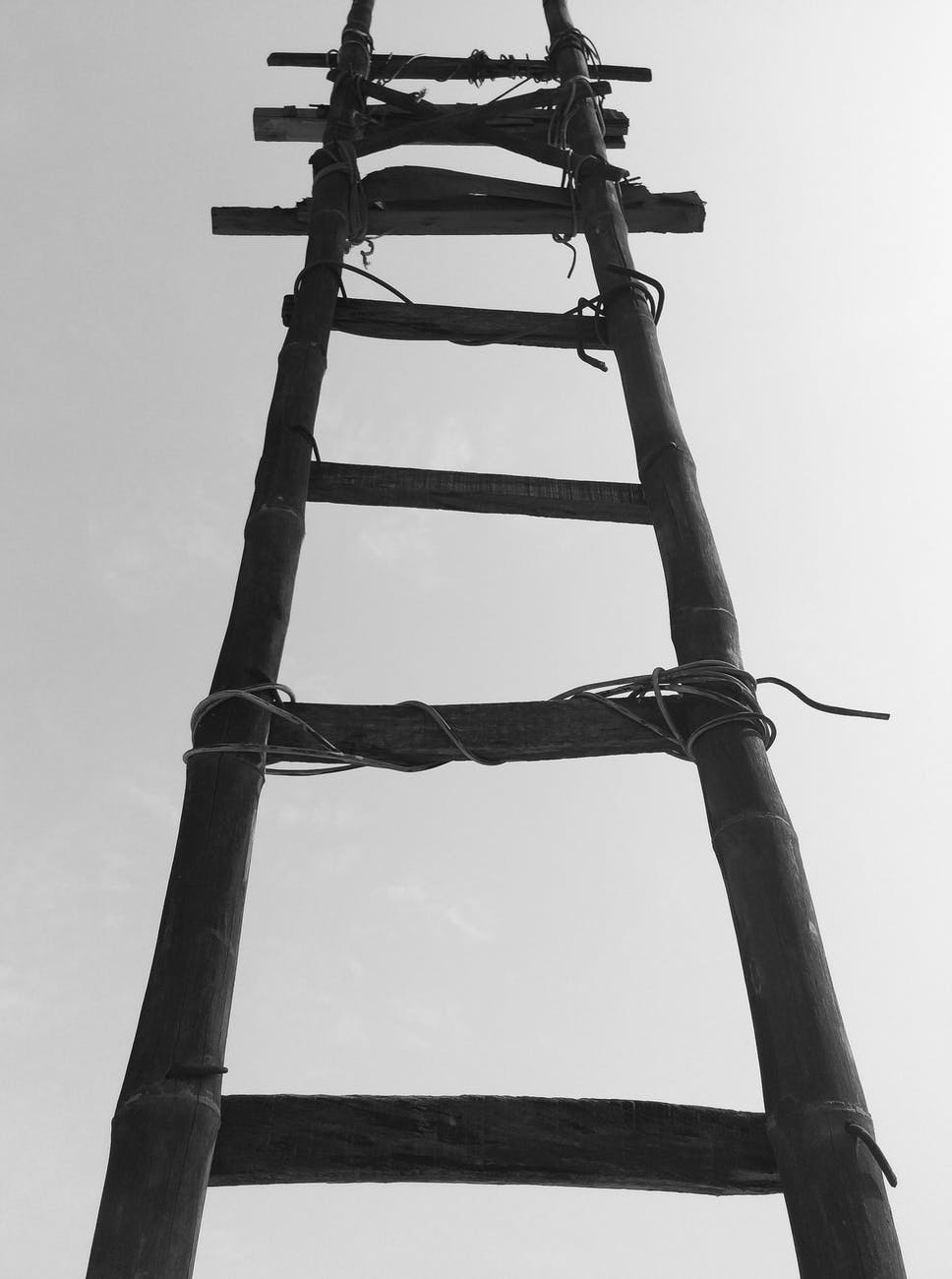 There is a ladder set on earth
That angels can descend,
Stepping down to kiss the earth
And by it re-ascend,
And at the top there stands the Lord
Declaring His great Name
To Jacob and his descendants
His blessing and His aim,
That through him all nations be blessed,
And to him gives that land,
For the Lord was within that place
Though he’d not understand.

There is a ladder to heaven
with one rail and one rung.
It is the ladder made of wood
Upon which Jesus hung.
It is the axis mundi
And the way from God to man.
It is the way men may see God
And from it hear His plan.
Nathanael, Philip had told,
An Israelite indeed,
A man who harbored no deceit
Come from Abraham’s seed.
Nathanael doubted at first
If He was any good,
But Messiah told him his life
And then he understood
That Jesus is the Son of God,
The King of Israel,
Of whom Moses, the prophets wrote,
Of whom Philip did tell,
On whom he’d see angels descend
and re-ascend upon,
Declaring heaven’s presence here
Because the veil was gone.

And now Lord, lift up Jacob’s veil,
Let Israel awake,
To see the Ladder You have made
And not Your love forsake.
Declare to Israel her life
And help her understand
That by her all nations are blessed
Through Christ as You command.

Jacob left Beersheba and went toward Haran. And he came to a certain place and stayed there that night, because the sun had set. Taking one of the stones of the place, he put it under his head and lay down in that place to sleep. And he dreamed, and behold, there was a ladder set up on the earth, and the top of it reached to heaven. And behold, the angels of God were ascending and descending on it! And behold, the Lord stood above it and said, “I am the Lord, the God of Abraham your father and the God of Isaac. The land on which you lie I will give to you and to your offspring. Your offspring shall be like the dust of the earth, and you shall spread abroad to the west and to the east and to the north and to the south, and in you and your offspring shall all the families of the earth be blessed. Behold, I am with you and will keep you wherever you go, and will bring you back to this land. For I will not leave you until I have done what I have promised you.” Then Jacob awoke from his sleep and said, “Surely the Lord is in this place, and I did not know it.” And he was afraid and said, “How awesome is this place! This is none other than the house of God, and this is the gate of heaven.”

The next day Jesus decided to go to Galilee. He found Philip and said to him, “Follow me.” Now Philip was from Bethsaida, the city of Andrew and Peter. Philip found Nathanael and said to him, “We have found him of whom Moses in the Law and also the prophets wrote, Jesus of Nazareth, the son of Joseph.” Nathanael said to him, “Can anything good come out of Nazareth?” Philip said to him, “Come and see.” Jesus saw Nathanael coming toward him and said of him, “Behold, an Israelite indeed, in whom there is no deceit!” Nathanael said to him, “How do you know me?” Jesus answered him, “Before Philip called you, when you were under the fig tree, I saw you.” Nathanael answered him, “Rabbi, you are the Son of God! You are the King of Israel!” Jesus answered him, “Because I said to you, ‘I saw you under the fig tree,’ do you believe? You will see greater things than these.” And he said to him, “Truly, truly, I say to you, you will see heaven opened, and the angels of God ascending and descending on the Son of Man.”

This poem comes directly from realizing the connection between the two above passages. Jesus compares Nathanael’s future experiences with Him to be like what Jacob experienced when God visited him in a dream and he saw the angels of God going up and down the ladder with God at the top. Because Jesus says the angels will ascend and descend on Him, he is saying he is Jacob’s ladder! Jacob did not know God was in the land until God revealed Himself to him, and likewise Nathanael did not recognize God in Jesus Christ until Jesus revealed Himself to him. May God reveal Himself to you and me this day in places we never knew He always has been.